At each race we give an award to a race day volunteer that spread enthusiasm, happiness, and a touch of goofiness to our event. We received a record number of submissions and comments on the incredible volunteer team present at this event. Thank you to all the volunteers and race captains for their role in making Sunday so special. 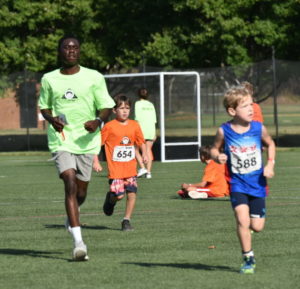 Chineme Agulanna, a senior at Episcopal High School, is this year’s winner of the Ken Caputo Volunteer Service award because of his enthusiasm and dedication to making race day the best it could be for each racer. “I watched him countless times run kids into the Finish Line saying the most encouraging things to them such as “let’s finish this strong,” or “just a little bit more,” or “you’re doing it!” remarked spectator, Jackie Lago. Run Captain, Anne Carver added, “Chineme was wonderful. He ran the course at least three times cheering kids on the whole way. Chineme, thank you for doing your part of help our racers be their best.

“Arman Singh was above and beyond the best volunteer I have ever had the pleasure of working with,” said Sally Huizinga, Transition Co-Captain. “He was a stellar transition volunteer, helping the kids, giving high fives, and even standing and holding up the arch for half an hour when it looked like it was falling down. It was during break down though when he went above and beyond to stay until the very very end, and eventually not only helped us pack the van but ran to the dinning hall to rally some of us friends to help. He also NEVER stopped smiling the whole day.” Swim Captain, Milly Huizinga, added 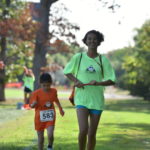 “Dripping with sweat and looking like he was just dead beat tired, he wanted to do more – truly a stellar guy.”

“Nia Beane (shown left) was spectacular,” said Tim Bifulco, Transition Co-Captain. “She was at the head of the transition zone helping keep both swimmers and bikers entering to the zone under the correct arch right up until the last minute that she left to do the run course sweep.” After the race, Nia was helpful ensuring that volunteer bags and extra cupcakes were distributed and everything was cleaned up. She never stopped smiling!

Gilbert Amason, our 2017 Ken Caputo winner received nominations again this year for the third in a row!  “My vote goes to Gilbert again this year!” stated the Finish Line Captain, Clare van der Horst. “He was assigned to me in Finish but I reassigned him to run when they needed more volunteers. He was just so pleasant and amazingly helpful to work with. I saw him run some kids in at the end and he was cheering and being super enthusiastic as usual. He was also one of the last few volunteers left packing up at the end and being super helpful.” Good luck next year, Gilbert, and thank you for 3 years of exemplary service. 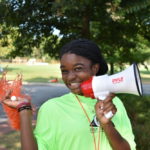 Overflowing with enthusiasm, Regan Simmons (shown left) gets an honorable mention. As racers got ready to start the race, Regan was there to pump them up and give them a friendly and reassuring high five. Whether it was the first or the last racer, Regan was there cheering them on. Thanks for spreading your happiness with all of us, Regan!

Rounding our the Honorable Mentions is two time nominee, Tyler Povenelli. Parking Captain, Susan Apgood wrote, “He was with me on parking for the first part of the race and then went to the run course. He was kind to all the racers and parents, so engaged on all that was going on in the race and a joy to be around.  He has a great role model to others.”